It started out as what I thought would be a simple, reasonable, teachable moment. My four-year-old son had just gone potty and immediately went to rub his yes. “Don’t touch your eyes till you’ve washed your hands, or you’ll get pink eye.” His eyes widened as he hopped off the toilet. “What?! Pink?!” I tried my best to explain what it was, but it was the start of a couple days’ worth of fascination with pink eye. The kind of questions that you feel you’ve already answered, but they keep on coming: “Mama, are your eyes pink? Mama, do I have pink eye? Mama, what color are your eyes…pink?” …The constant questioning that makes you think you are going insane.

My in-laws, who watched him that day, confirmed at pick-up that the questions had continued throughout the day. “Why is he so obsessed with pink eye all of a sudden?” Because he’s JJ. Because he’s four.

Well, coincidentally, his younger sister, who had a little goo seeping from her eye that same day, became worse the following day. By mid-day my mom confirmed it was now coming out of both eyes. I hurried home after a full day of work to get her to urgent care before they closed. JJ asked where I was taking her, and I told him I thought his sister had pink eye, so I was taking her to the doctor. This information brought new life to his obsession. As I closed the door, I could hear him go into the same list of questions from the day before with my husband.

Two and a half hours later, I returned home with my daughter and a fresh tube of eye antibiotic cream. I was exhausted, hungry, and hyper aware of every single sensation in my own eyes, just waiting for that other shoe to drop. Even though I know this kind of thing is incredibly common, I always feel a little defeated when my kids get something. Especially when I’m feeling run down, I pile on in my mind about what more I could have done to prevent their current illness. With this state of mind, I turned to the pile of dishes in the sink and began loading the dishwasher.

Five minutes later, my husband came into the kitchen with a huge smile on his face. I said, “What?” He said, “I just took JJ to the bathroom. He washed his hands after and in a cheerful voice said, “Bye, bye, pink eye!”

And then, the sweet relief of laughter to erase the day, chase away the feelings of self-doubt, and remind myself of the unique joy that comes from being a parent. 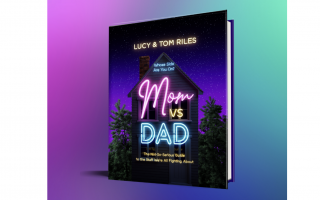 MOM vs. DAD: The Not-So-Serious Guide to the Stuff We’re All Fighting About

The Birth of the Bestie Moon!